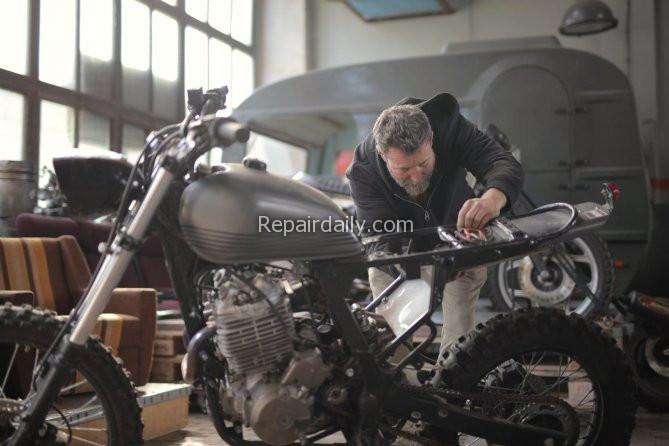 Starting off the season! You eagerly took your motorcycle out of the garage. With full of excitement, you just pressed the starter button and got startled with a ridiculously down "click" sound with no start!

Be fairly sure that your AGM battery may not be working partially or entirely due to bad weather, lack of care, idleness or age.

Several other signs will help you make sure that the battery is dead or near to death and it's time to replace it, which is our topic of discussion today.

Table of Contents
How Long Does a Motorcycle Battery Last?
Signs of a Bad Motorcycle Battery
No Proper Start or No Start At All
Fading Horns and Headlights
Holding No Charge
Corroded or Broken Battery Terminals
Deformed Casing
Leaking
Discoloration
How to Test if the Battery is Really Bad?
Concluding Remarks

How Long Does a Motorcycle Battery Last?

Since motorcycle batteries come in many forms, their lifespans are naturally different. Apart from this, each type of battery's estimated lifespan can be more or less due to various reasons.

Signs of a Bad Motorcycle Battery

As I said before, not all batteries can last their lifespan. Not having a good maintainer, negligence, accidents, bad weather, aging, and in some cases, overcharge can cause sudden battery death. From some of the signals, you can understand that your battery is in bad condition or nearly lost its life.

No Proper Start or No Start At All

If you notice that your motorcycle starts after several tries or does not start at all, you may assume that your battery is in bad condition or dead. And if the situation is like the motorcycle is not starting without a jumpstart, be fairly sure that it is time to replace your battery. Ignoring such a potential indicator of a failing battery can end up with a sudden stop in mid of a ride, which might be very much unpleasant.

If you find your headlight is losing brightness or blinking often, consider that might be a result of a dying battery. But if the headlamp fails to fire, probably the battery is dead. A dying motorcycle battery will also gradually reduce the volume of your motorcycle horn. Receding horn sound or dimming headlight is always a sign of a bad motorcycle battery.

Suppose you put the battery in charge and see that it is being charged continuously or is being fully charged in a short time, but the charge goes to zero immediately or shortly after removing it from the charger. That is, the battery can not hold the charge in any way. If this is the case, maybe the battery is dead then, and it's a risk to your motorcycle.

If you find the battery terminals (lead plates) are partially corroded, that is a sign of your battery getting bad. In this phase, it might not function well. But if the terminals are cleaned carefully at any time before breaking, the battery can start working again if it has life still left. But if you find terminals broken, that's one of the definite signs of a bad motorcycle battery, and it requires replacement.

Bulges or cracks in the battery casing are nearly a confirmed sign of your battery being toasted. It indicates chemical gas inside the battery generated from corrosion because of overcharge or lousy charging system. Whatever the case, it's time to replace the battery.

It's an obvious sign of a bad battery if it leaks acid outside. It happens due to severe oxidation, leading the battery to cease function. In such a condition, it is highly unprofessional to continue riding a bike without a battery replacement.

Generally, discoloration may occur for other reasons, for example, stains from inside the motorcycle. But it is also a strong sign that your battery is worsening. If you find a single hint like receding horn sound, improper ignition, or dimming light and then find the battery discolored, get it as a confirmed sign of failing battery.

How to Test if the Battery is Really Bad?

Here is a critical piece of information. Your motorcycle may underperform due to any other motorcycle malfunction, despite the battery being in perfect condition. In such a context, there is a possibility of showing one or more signs similar to the above-explained ones, creating high confusion if not observed and decided carefully. For example, a bad alternator can lead to a motorcycle battery not holding charge. You may have thought that it was a battery problem - you replaced it in a hurry - but you didn't get any remedy for the trouble you have been facing.

So, check if your battery is awful before making a quick replacement. You can seek the help of a technician or local motorcycle repair shop or even make your own decisions by checking it in a multimeter.

A multimeter or voltmeter is a handy electronic device for motorcyclists. It mainly works to measure voltage, current, and resistance. All voltmeters come with user instructions given by manufacturers, so testing with it should be pretty easy and only requires your careful pursuance. When you test the battery using a multimeter, check the reading several times. If it seems abnormal, like showing anything below 12-Volt when at full charge or shortly after charging, you can decide to take a new replacement.

A battery for your motorcycle plays a critical role, and having a troublesome one may make it measurable. So, observe the signals, test the battery and replace if necessary. Last but not least, do not ignore your battery and use a proper charging and maintenance system.