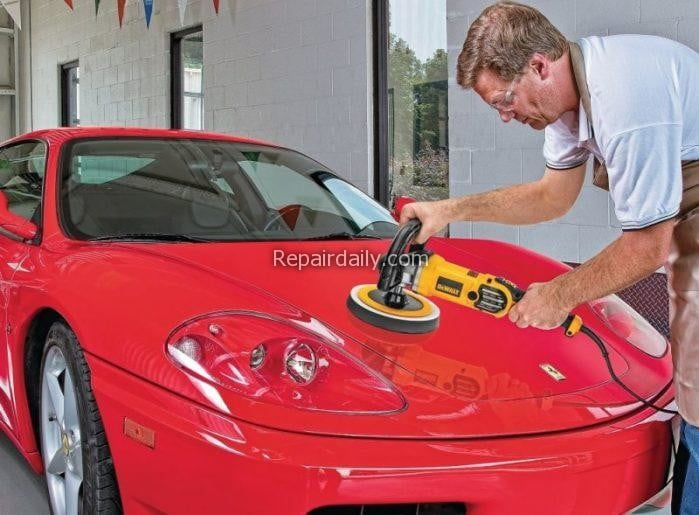 Want to know How To Use A Car Polisher Buffer that helps to make your car clean, dirt free and shining? Then you are at the right place where all discussion topics are car polisher buffers and waxing a car with buffers.

Did know that, rotary electric buffers and random orbital buffers are the most popular polishers or buffers for waxing and polishing the cars. They are strong, have speed motors for rotation and also require less pressure that reduce the chances of additional scratch. So polishing and waxing the car panels is a hustle free job when you use an electric buffer.

A car polisher Buffer is very helpful to remove dirt, scratch, damage paint from your car panel. But knowing the right process is also mandatory to prevent the additional damage. That’s why here we are to give you a complete guide about How To Use A Car Polisher Buffer.

Complete Guide On How To Use A Car Polisher Buffer

First step is make sure that your car is washed, your car is dust free and clean. Because it's very essential to wash the car before polish that prevents any additional scratches. And also make sure that after washing, you remove the excess water from the car surface with dry, clean cloth. Now you are ready to go for using a car polisher buffer.

For car polishing, you can use an electric buffer to speed up the cleaning process. But before we start you need to know that Rotary buffers and random orbital polishers are the most popular electric buffers in the market.

Rotary buffers are designed for heavily padded surfaces that are controlled by one single motor. And it's great for eliminating swirl marks, scratches and damage paint surfaces. Moreover, it’s less in cost but very difficult to use. Many reviewers also said that sometimes it's very ineffective and sometimes it's very aggressive.

Although, in a Rotary buffer you only get one direction of the rotating motor but a random orbital buffer design to rotate in 2 different directions. Besides that here you also get a speed controller, smart motor and transmission option to minimize the load on the surface and maximize the polishing process. But it's more expensive than a Rotary buffer.

So go for any option as per your budget.

So before we start, make sure you park your car in a well lighting area to see the swirling, scratches and damage pains clearly.

Now bring your selected buffer and add a small amount of polisher on the buffer pad. You can also use spray with the polisher on panel to make the cleaning productive. And don’t forget to check your buffer before polishing.

Now, place the Rotary buffer or random orbital buffer onto the car panel and rotate the pad in circular motion to spread the polisher on the panel. Then turn the switch on to rotate the buffer pad. Remember, buffers need less pressure to polish, so don’t push the buffer, make your touch polite.

Start work in a small section, complete that one before moving to the next section or area. So when that particular area looks clean and dry, use a clean cloth to remove excess unwanted substance. So this is the right process about How To Use A Car Polisher Buffer.

How To Wax A Car With Electric Buffer

Although waxing a car with an electric buffer is the same as polishing, here also the key rule is speed and polite pressure. So just go clean or polish the surface, make the car panels ready for waxing. It will prevent additional scratches on the panel when you wax.

For waxing you can go for an orbital electric buffer, which contacts less with the surface to avoid damage and also requires less pressure for washing.

When you choose the buffer, bring a best quality wax to apply them on the buffer's pad.

Take a small amount and put it on the middle of the pad.

Now rotate the pad on the surface while the buffer is turned off, it helps to spread the wax around the surface for better waxing.

Then turn on the buffer and politely rotate it throughout the surface for one or two times in the same place. So these simple processes can easily be followed by any beginners who want to buff a car.

So this is the process of waxing a car with an electric buffer, don’t forget to use an orbital electric buffer to get the best result. But if you ask, what is the best car wax to use with an orbital buffer then we recommend to go for 3D Speed All in One Polish/Wax (32oz.). Because this is a versatile car wax that allows users to polish and  sealant with the one item. And also come with a decent price tag, which is affordable.

FAQS Of How To Use A Car Polisher Buffer

Is there a difference between a buffer and a polisher?

As per our research NO, because buffers or polishers both are the same machine or tool that contain a pad, which rotate to remove swirl marks, dirt, and damage paint to make the car panels clean and shining. But the type of polisher or buffer is different like you know some popular name such as rotary and random orbital. And honestly both are recognised as buffers or polishers. Rotary polisher or buffer used to improve paint work and it rotated with large in one direction. But a random orbital buffer or polisher is also used for cleaning, shining and damage paint remover, although it's more advanced and costly.

Can you polish car with a buffer?

Yes you can polish a car with a buffer. And try to use popular electric buffers like rotary buffers or random orbital buffers to remove scratches, swirling, and improve paint work. Moreover, as a polisher you can use DEWALT DWP849X Buffer/Polisher that gives you overall best polish benefits.

Should I use a buffer to wax my car?

YES, why not?. Because buffers have strong speed motors with a soft pad that rotate in different directions as per the type. And it's very helpful to remove unwanted substances from the car panels more easily. So buy an electric buffer to wax a car that minimizes your time, effort and money.

Can buffing a car remove scratches?

Yes buffing a car removes scratches, along with damage, pain and dirt to make your car more clean and shining like jewellery. For buffing, you can use polisher for proper cleaning, remove thin coat and use wax to protect the paint from dirt and scratches.