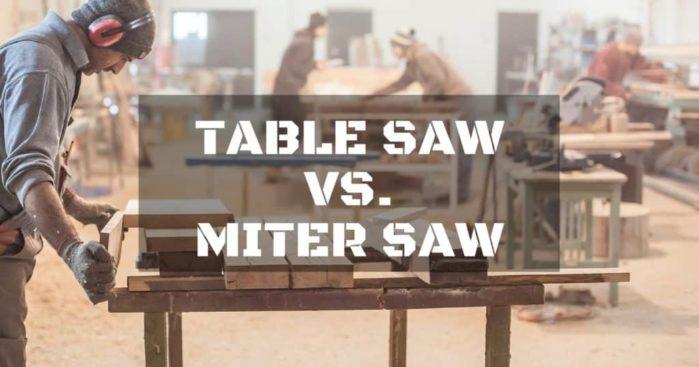 If you are a home handyman, a woodworking hobbyist, or an ambitious DIYer, you’re probably hoping to have at least one decent power saw in your workshop. While you walk the halls of your local tool shop, the natural debate would be getting a table saw vs miter saw.

I. Table Saw vs. Miter Saw: What’s the Difference?

II. Okay, so which one is better?

If we are going to talk about versatility than there is no argument that a table saw is preferable to a miter saw. There is just so much more you can do with a table saw. Cross cuts rip cuts, longer panels, and with the right set of accessories, even cutting some ninety-degree angles. A miter saw simply cannot do all that. What it can do, however, is perform quick, deep crosscuts in almost no time at all for a fraction of the price. For the DIYer on the budget, a miter saw just makes a lot more sense. If you think that you are going to need the versatility of the table saw in the long term, it might be more advantageous to save up for the budget table saw.
Before deciding which one is right for you, think about these factors.

Any blade, from a power saw to the table knife, is potentially dangerous. And when we are talking about tools made to cut quickly through even thick stocks of wood, there is a real possibility for disaster. For those unaccustomed to power﻿ tool﻿s, the kickback of the table saw might be an unexpected danger. While there is some danger in the miter saw, it’s definitely better designed for your safety. Both miter saws and table saws have “fences” to help deal with this, but the fence on the miter generally holds everything tightly in place and does better at reducing kickback and preventing other mishaps.

If you don’t know what the name of the type of cut you’ll be doing is, you are probably going to be doing cross cuts. That’s just a rule of thumb, but it is the most common cut any hobbyist or DIYer will be doing. If you aren’t working with something too wide, the miter saw would serve you well. If you have larger panels or need to go against the grain, the table saw might be necessary.

As I’ve stated already, a table saw is an expensive tool. At the absolute low end, you’ll see a few for around one hundred dollars. Usually, though, expect to pay a few hundred dollars. A miter saw, while not being an inexpensive alternative, averages quite a bit lower than a table saw. A good one can be found under one hundred and fifty dollars, and it won’t exactly skimp out on the features.

Regardless of which one you end up getting, you need to pay attention to some of the features. First of all, the power. Check the amps to know the overall cutting power of your tool. Most power saws claim to run 15 AMPS, which is the most the average person will need. How easy is it replace blades that have been damaged or gone dull? What type of alignment accessories does it have?

While I definitely encourage people to do specific research into what tools will suit their individual needs best, here are some of my personal recommendations.

For the budget conscious, this durable, lightweight miter saw retails just over one hundred dollars. It has a 15 Amp motor which makes it powerful enough to handle many of the harder woods and other materials with relative ease. The saw has a bevel that adjusts to 45 degrees to provide a good range of vertical cut angles. Across the wood, the miter adjusts to 52 degrees. That’s a good range for what is ultimately a very inexpensive tool.

A few drawbacks, though. The dust collection might as well be nonexistent. Opening the trap up to clean the dust will more than likely spread it around your workshop, and that’s assuming that it even picks up that much dust in the first place. The screws on the fence also have a tendency to work themselves loose, so you definitely need to be on the lookout. And while it’s probably the most accurate miter you can buy for the price, the precision still leaves something to be desired.

As I’ve made very clear at this point, a table saw is a pretty large investment. The Craftsman Evolv, however, is a table saw that you could purchase for roughly the same price as a decent miter saw. It’s a smaller model that doesn’t have a lot of space, so larger panels might not be possible (at least without some more complicated rigging) but the 15 amp motor will perform solid cross and rips on most materials. It’s lightweight, easy to move, and very easy to change the blades. It’s got a cut depth of 2.5 inches for a 90-degree cut.
The fences to help hold the wood in places are a bit loose and tend to be a bit inaccurate, and you might have to put together your own jigs to be able to cut certain angle.

If you’ve decided on a miter, and are looking for a real power house of a saw, the Dewalt DW715 might be the choice for you. It’s got a 15 Amp motor, a twelve-inch blade, a tilt from 3 degrees to the right and 48 degrees to the left, allowing for a wide range of vertical cuts. The miter allows for the material to be placed at up to fifty degrees so the cut across the wood and is shaped well to your liking. It’s high power motor, large blade, and adjustable fence makes tearing through even the densest 4×4’s no problem at all.

Unfortunately, despite being such a powerhouse of a tool, the Dewalt DW715 is lacking in a laser precision attachment, something that is common amongst similarly priced miter saws. So it isn’t exactly a precision saw, but a skilled set of hands can calibrate it to make those more accurate cuts.

A good choice for a table saw from Dewalt is the DW745 Jobsite Table Saw. This machine is built to be compact enough to be carried onto a job site for just about all sawing needs without taking too much space or time to set up. It can rip up to 20inches, longer if you are able to rig something yourself or guide it free handed. It doesn’t come with a stand as the intention is for it be propped up where ever the user needs it. It features a maximum cut depth of 3 and 1/8th inches, which is enough to easily handle most panels or 2x4s.

While’s it’s got great functionality, there are some drawbacks. As stated before, it doesn’t come with a stand, so you’d need to have a surface for it. You might have to, like with other Dewalt tools, recalibrate some of the gages to make sure your cuts are accurate. Still, at close to $300 dollars, it’s definitely worth looking into.

This really was a tough call. All of these saws are very good, and for most people, any one of them will perform most if not all common cutting tasks. Still, when I have my back up against the wall, I must say that the Dewalt DW715 is my favorite of the bunch. It’s a powerful saw with a great range that can do just about anything I’ve ever needed, save for those longer rip cuts.

If you do need a machine capable of longer rip cuts, however, I will suggest that you go with the Craftsman Evolv, especially if you’re a beginner looking for their first table saw. It’s not a versatile as the Dewalt DW745 but what it lacks in versatility it makes up for in affordability. For half the price of the Dewalt, you can get a pretty stable, solid machine. The biggest drawback is the table space and weak fences, but if you can work around that, it’s a very solid machine.