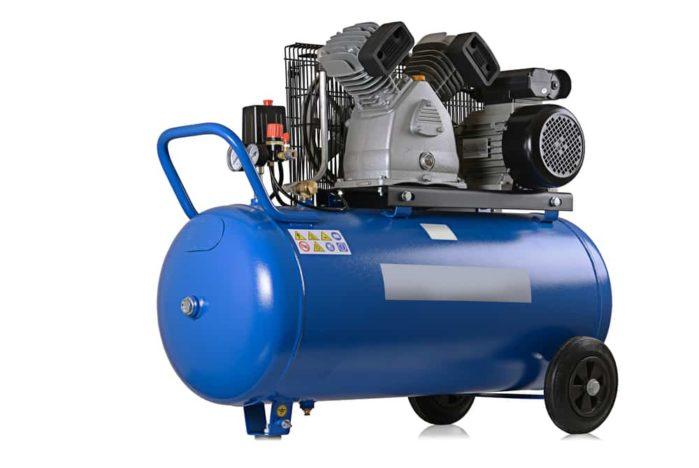 Air compressors tend to collect water in their tanks, but where does the water come from, and can it affect the air compressor performance, and how often should you clean the tank and take out the water? I am sure if you have an air compressor then you also have these questions.

Air already contains small water molecules that can’t be seen with naked eyes, but when air gets compressed, the volume is decreased and the pressure is increased. As a result, it loses its water retention capacity, and water molecules are squeezed out. It then condenses back to the liquid state, which is then collected in the tank of the system.

Normal air in the atmosphere is not made up of a single gas, but a mixture of gases. Water vapor is one of these constituents. However, not all of these gases get compressed equally when they go through an air compressor.

Water molecules are amongst the larger molecules. With the compression of air reducing the volume by around 10-12 times, there is no space for the molecules. However, the increased pressure being applied converts the gaseous vapor into its liquid form, resulting in the formation of water droplets within the compressor system.

Compressors by design have an inbuilt tank to collect these water droplets. It has a valve system that allows the water to then be drained from time to time, to prevent the build-up of moisture within the compressor, which can be harmful otherwise.

How do I get the moisture out of my air compressor?

Moisture can be removed from within the compressor by primarily preventing opportunities for it to build up within the system. This means the tank has to be drained and the components operating in primarily dry conditions.

One of the methods to remove moisture from within the tank is by installing a water separator filter. The filter effectively removes 40%-60% of the water that is in the air. Using the principle of centrifugal force, it separates the heavier molecules of water from the air to ensure the air that goes in is dry.

Desiccant air dryers are the most efficient type of dryers that remove most of the water content. Using chemical compounds, these dryers attract water molecules in the compressed air to form bonds, removing them from the output air.

What happens if the air compressor is not drained?

If an air compressor is not drained, the condensate stored in the tank gets converted to moisture again. As a result, the moisture will start spreading across the various internal components. This can have a number of consequences on the air compressor.

The moisture can cause the corrosion of internal components. This can result in the formation of rust, which will then reduce the efficiency of the compressor. This includes longer running time before the air is compressed and can lead to failure of the machine over the long run.

The tank itself will be affected most by the corrosion by water not being drained. It can result in cracks and material failure that can cost you quite a bit to repair. It will also result in increased runtime of the compressor, which will increase operating costs considerably.

If you have a question about what will happen if you forgot to depressurize the air compressor after the work is finished or is it bad to leave an air compressor pressurized? We have found a detailed article by Tools Territory, they have covered this question and other similar kinds of questions in detail, you can read their detailed article to know more in-depth about this topic.

How to prevent water from collecting inside the air compressor?

One way to remove moisture from the air compressor is to use a water trap in the inlet. This is a mechanism that helps remove the water content from the air before allowing it to get compressed. As a result, there is no condensation during the compression, making it more efficient.

Refrigerated air dryers regulate the temperature of the air within the compressor. It tries to reduce the dew point of the compressor to allow for the easier separation of the water vapor from the air, which is then eventually released to the drain. Other specific tools like this help condition the air to protect the compressor from moisture-related damage.

Another way to remove moisture from the compressor is by regulating the valve that drains the water from within. Most valves are located at the bottom of the tank to ensure the complete removal of water, to prevent moisture build-up.

An improper functioning valve can result in moisture spreading within the system, which can result in the corroding of internal components. Ensuring that the valve is functioning properly and regular drainage of the fluid can ensure that the moisture from within is removed.

How often should you drain water from the air compressor?

Water from compressors should be drained as frequently as possible, especially in applications where it is used for continuous periods of time. However, depending on the type of tank and drainage system, the period before which drainage must occur can vary.

A healthy practice is to drain the tank of the compressor at the end of the day if used. This is the case of manually operated drain valves. The valve has to be operated directly by the user, which gives them complete control about when the tank must be drained depending on the usage.

With advances in technology, manufacturers have developed auto-drain valves and pneumatic valves that allow for the periodic removal of water without human interference.

The pneumatic valves work on the basis of air pressure, auto-drain valves have an electronic circuit that includes a timer. The timer can be set to a fixed time period, after which the valve opens to allow the flow of the condensate from within.

However, pneumatic valves and auto-drain valves are more expensive and harder to maintain. These can be used in applications where the compressor is to be kept in a hard-to-access location or installed permanently for longer run time durations.

What are the effects of water in compressed air?

Water can have a number of detrimental effects because of the compression that occurs to the air. In some cases, the temperature can dip by quite an extent, which can lead to the freezing of the water. This in turn can clog various components of the machine and cause a major malfunction or shut down of the unit.

Water can also have negative consequences when it comes to the factor of corrosion. This can be especially true if the machine is operated in hot and humid conditions. It can accelerate corrosion and rust formation, which can severely reduce the quality of work for which the compressor is required.

This can be especially bad for industries and applications that have high-pressure air applications, as the wet air can cause damage to a number of other instruments and gauges, forcing expensive repairs.

Wet air is heavier and requires more energy to be sent out of the compressor. As a result, the compressor will have to run for longer periods of time and also suffer from reduced efficiency as a result. This can reduce the lifespan of the machine while increasing the maintenance and repair costs by a large margin.